"TOGETHER THROUGH LIFE" THE NEVER ENDING Tour 2009 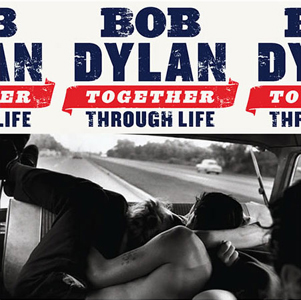 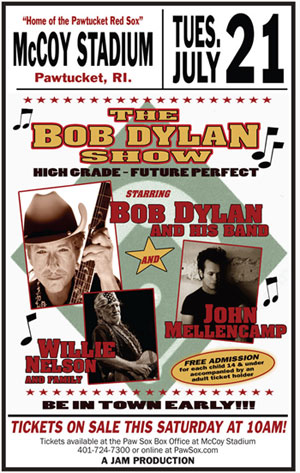 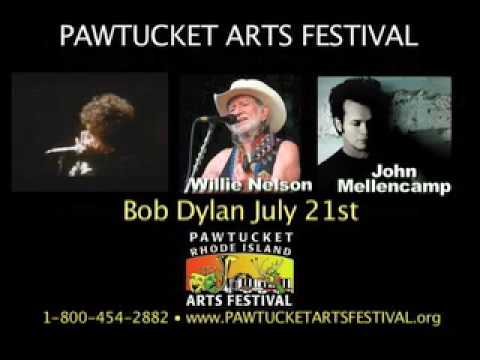 Cat's In The Well

It Ain't Me, Babe

I'll Be Your Baby Tonight

This Wheel's On Fire

It's Alright, Ma (I'm Only Bleeding)

All Along The Watchtower 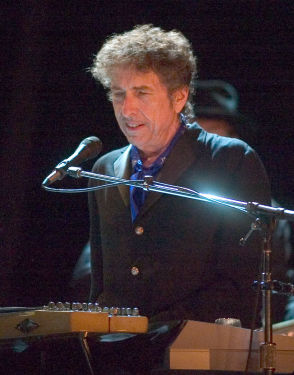 Bob Dylan, "Cats in the Well" & "It Ain't Me, Babe" Live McCoy Stadium

PAWTUCKET –– What better place than a minor-league ballpark for a summer triple-header featuring Bob Dylan, Willie Nelson and John Mellencamp. For those of you keeping score, that’s two genuine American icons and one solid Heartland rocker in Mellencamp.

Tuesday night’s show attracted about 9,298 fans to McCoy Stadium, home of the Pawtucket Red Sox. Long lines circled the stadium just before the gates opened at 5 p.m. Even the weather cooperated, as the heavy rains that fell throughout much of the day let up.

This was Dylan’s second visit to McCoy –– he played here during his minor-league stadium tour in 2006. Dylan doesn’t sound anything close to the way he did in ’65 or ’74. To tell the truth, he can barely sing at all, at least not in the conventional sense. His voice sounds like it’s been filtered through a couple pounds of gravel that’s been marinated in nicotine for the last 20 years. And those old, familiar melodies? You can mostly forget about ‘em.

Which is not to say Dylan doesn’t communicate, with bursts of lyrics set against the driving music of his excellent band. Admittedly, that works a lot better on, say, “Masters of War” than a former crooner like “I’ll Be Your Baby Tonight.”

Dylan spent most of the evening playing organ, and he didn’t speak a word until the very end of his set, when he introduced the band..

He spat out the phrases of “It Ain’t Me, Babe” and produced some swirling organ riffs to back “The Levee’s Gonna Break.” Dylan & Co. introduced “Masters of War” with an ominous low thrumming, punctuated by cracking drumbeats and Dylan’s rasped singing, and there was a long, powerful attack on “Highway 61 Revisited.” The show ended with “Like a Rolling Stone,” still anthemic even if Dylan can no longer draw out the “how does it feeeeeeeeeel” of the chorus, followed by a bouncy “Jolene” and finally “All Along the Watchtower.”